British and French forces landed on Sword Beach in Caen-la-Mer on 6 June 1944. Take the time to visit Sword Beach and see the vestiges and the commemoration sites, and immerse yourself in the summer of 1944 during one of the major battles of the Second World War.

Sword Beach: a witness to the past

This vast sandy beach is 8 km long and lies between Ouistreham and Saint-Aubin-Sur-Mer. Do you see? Now, imagine thousands of men under the English Lieutenant General John Crocker and 177 French commandos led by Major Kieffer! Tanks, gliders, parachutes, boats… The Liberation of Normandy is a story involving over 30,000 characters. To be shared with your children and grand-children. On Sword Beach, take your time and look all around you. You will probably see the bunkers in the sand dunes, where the attacking forces took refuge. Along the beach, you can also see anti-tank obstacles, know as dragon’s teeth. You can still imagine the soldiers clearing the access to the beach and Bill Millin playing the bagpipes as he arrived in Normandy. It is even said that the Germans stopped firing for a short while, they were so astonished.

For a total immersion in the daily life of German soldiers during the war, go to the Great Bunker Atlantic Wall Museum, which is now listed as a Historic Monument. In a setting that has been recreated down to the smallest details, you will actually walk through the German command post for the Orne estuary gun batteries! The machine room, pharmacy, infirmary, armoury, radio transmissions room, the telephone switchboard, the observation post… An incredible experience immersing you in the German army’s decision-making centre.

The bunkers at the Hillman site

Former German site of the Second World War, do not miss the 10 of the 20 bunkers of the Hillman Site in Colleville-Montgomery spread over 24 hectares. Guides will explain to you that this was actually the coastal defense command post of the 736th Grenadier Regiment of the 716th German Infantry Division.

To relive the history of the French fighters who were able to join the British commandos, take the time to visit the N ° 4 Commando Museum. Kids will love seeing the old soldiers’ equipment and uniforms!

Between the Landing beaches and Caen, stop at the Pegasus Memorial. You will find there many films and period objects which retrace the arrival in Normandy of the paratroopers, 1st Liberators of the 6th British Airborne Division on the night of June 5 to 6, 1944. You will discover the famous Pegasus Bridge in the gardens of the Memorial and its replica along the Canal, located next to the first liberated house in France, the Café Gondrée. 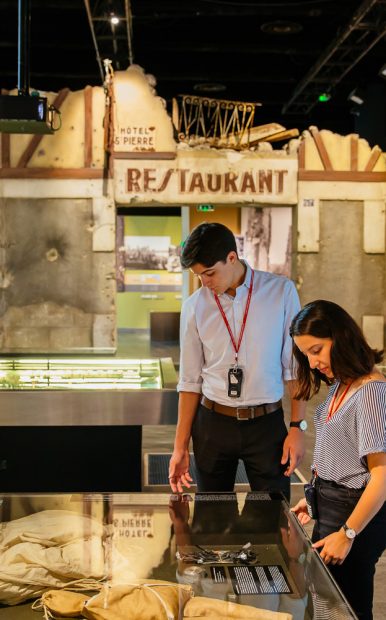