The Caen Memorial was built on a bunker used as a German command post. It is one of the major sights of the city.
Come and visit a museum retracing the history of the Second World War, the D-Day landings, the Battle of Normandy and the Cold War.

A look back at world history at the Caen Memorial

As soon as you arrive at the Caen Memorial, you will find yourself back to 1939, in an area dedicated to the Second World War. All through the visit, costumes, photos and objects from the period are on display, while videos immerse visitors in the events… In front of us, there is an unsettling photo and a globe showing the borders Germany dreamed of in 1943.

Take the time to see the room devoted to D-Day and find out all about the Battle of Normandy. You can also watch a film about D-Day, “The Battle of Normandy: 100 days that changed the world”. You pass through the Memorial gardens, then go down into General Richter’s underground Bunker to relive the final moments of the German commanding officer and his staff.

History of the 20th century and Peace at the Caen Memorial

Even though the Caen Memorial is well known for retracing the history of the Second World War, the world after 1945 and the Cold War are also featured. You will see real vestiges of the Cold War, such as remnants of aircraft, a thermonuclear bomb and even a nuclear warhead… Don’t miss the two sections of the Berlin Wall brought back intact from the German capital!

Back on the D-Day beaches in Normandy

And why not continue your day with a tour of the D-Day landings beaches? From the Caen Memorial, set off on a guided coach tour to the main D-Day sites. The Pointe du Hoc, Omaha Beach, the US cemetery in Colleville-sur-Mer, the Artificial Bridge and the Arromanches cinema, you will know (almost) everything about this long day in summer 1944…

During the bus trip, a specialised D-Day guide will show you the scenes and tell you the stories about the attack strategy, the soldiers and even the failure of some of the military operations!

Omaha Beach, a vast stretch of sand, is now a commemoration site… It is also nicknamed “Bloody Omaha“. Many American soldiers are buried close by in the Colleville-sur-Mer cemetery. Here you can see 9387 white crosses lined up with the soldiers’ names so that we will never forget. The site includes the circular chapel, the Garden of the Missing and the Memorial. From the panoramic viewpoint, the view over Omaha Beach is truly striking!

Next we head for the Arromanches Artificial Bridge for the last stage in the tour! In the Arromanches Circular Cinema with room filled with big 360° screens, you can watch a film recounting the Battle of Normandy. This is a moving experience, plunging you into the heart of D-Day with previously unreleased black-and white pictures… 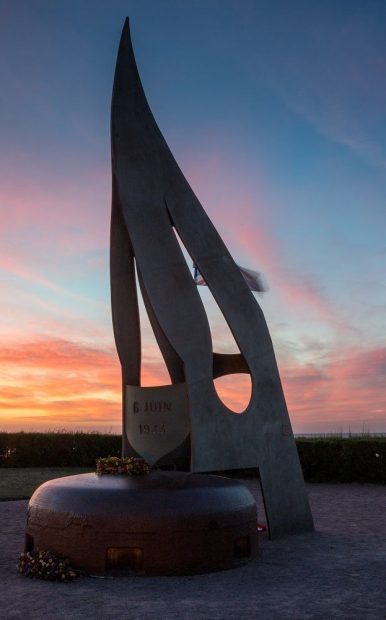