On 6 June 1944 at 7.25 a.m. the 4th commando with 177 soldiers led by Major Kieffer landed on French soil at Sword Beach… To find out what happened on D-Day, head for Ouistreham and Sword Beach. With the Great Bunker, the Hillman Fortress, the vestiges and commemorations, relive 6 June 1944…

A realistic visit to the Great Bunker

Head for Avenue du 6 Juin in Ouistreham, to visit the Atlantic Wall Museum. This large Bunker was 17 metres high and covered 5 levels. It was the main German command post.

On 9 June 1944, Lieutenant Bob Orrell changed the destiny of Ouistreham. Together with just 3 men, he placed explosives at the doors of the Bunker. And it took 4 hours to enter the iron giant! In the end, the 51 German soldiers surrendered, believing themselves to be surrounded by hundreds of British soldiers. When they came out, they found only 4 British soldiers waiting for them!

Today, the Great Bunker is a museum providing a real immersion in a German bunker with a very realistic atmosphere. You can visit the ventilation room, the armoury, the map room and first-aid room all reconstructed identically! At the top of the bunker, the range-finding position has an impressive view over the Normandy beaches. Before you leave, don’t miss the landing craft used in Steven Spielberg’s film, “Saving Private Ryan”, outside the museum.

“Achtung Minen” (Beware of the mines)! This warning sign was placed at the entrance to the Hillman Fortress. One of the biggest German command posts in the Second World War was at Colleville-Montgomery.

In 1942, the German army built 18 underground bunkers covering 24 hectares. Imagine an impregnable fort protected by mines, barbed wire and trenches! On 6 June 1944, the 1st battalion of the Suffolk Regiment was given the tough mission of capturing the Hillman Fortress! The Germans held out until 7 June 1944.

Today the site is managed by an association, “The Friends of the Suffolk Regiment”. They are passionate about the subject and can tell you real-life stories during your visit to the bunkers and the museum, every Tuesday from July to September. The outside of the site is open every day of the year. A visit to immerse you in history through objects and clothes from the period!

Sword Beach and the remains of the D-Day landings

Seventy years later, some remnants of D-Day still remain on Sword Beach. Walking around the beach huts you can see the ‘dragons’ teeth’, armed concrete blocks installed to prevent the progress of Allied tanks.

In the sand dunes, open your eyes, it is still possible to see the old blockhouses and casemates covered by grass and sand.

Sword Beach: a place of commemoration of 6 June 1944

Along Sword Beach, it is impossible to forget 6 June 1944. On the Boulevard Aristide Briand, above Sword Beach, stands the memorial called “the Flame“. To reach the monument, climb the 7 steps that symbolise the 7 soldiers who fell between the beach and the casino… As you approach the French Commandos Memorial, you will see the names of the 177 French soldiers who landed that day. Next to the monument, 10 steles pay tribute to the French soldiers who died on 6 June 1944. Simon Fraser, known as Lord Lovat, general of the Green Berets (the Scots) is also represented by a stone statue.

To the east of Sword Beach, stop in front of the stone stele inaugurated on the 70th anniversary of the D-Day landings. Finally, don’t miss the Tree of Liberty, a true symbol of memory, peace and freedom! 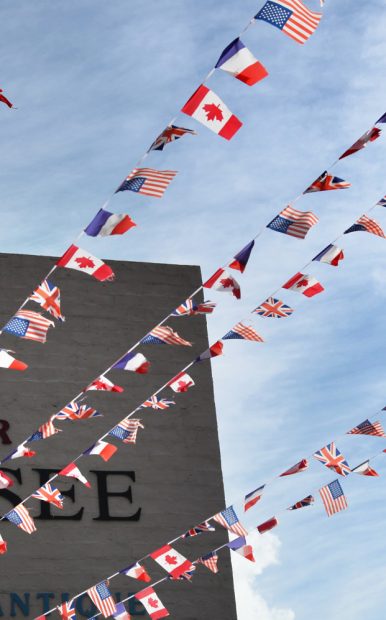