In a green setting, less than ten miles from Caen, there is a church that is almost one thousand years old. Thaon Church is a gem of Norman architecture in the Mue Valley. Taking in the Middle Ages, forest footpaths and disused underground quarries, we enjoyed a nature break around the old St Peter’s Church.

A church nestled in a green setting

As you make your way along the route leading down into the wood, you don’t expect to find a charming little church hiding behind the trees.

It is a luminous white colour, gradually appearing along the way until you arrive at the apse. The old St Peter’s Church dates from the late 11th century. The spire is from the same period as the abbeys in Caen.

LThe nave and the decoration are representative of 12th century Norman style: geometric patterns with gadroons. The building was remodelled in the 12th, 15th and 18th centuries, but the church still had its original decoration, with modillons, checked patterns and capitals. You should take the time to look at the extravagant modillons or corbels. You will see animals, people and strange smiles, plus a man who seems to be showing his backside… The theme of punishment and luxury is depicted, with a dragon biting the head of a poor sinner.

The inside of the church is not accessible. It is closed to the public, but regular visits are organised by the association of friends of the old church of Thaon, especially in July and August.

A few abandoned graves from an old cemetery can be seen beside the church. You can hear the River Mue flowing nearby. This peaceful spot seems to invite visitors to stay longer. Why not have a picnic?

The church floor was raised by 80cm in the 18th century due to the advance of the marshland, especially near the River Mue. The church was abandoned in 1840 and was later listed as a Historic Monument.

A walk in the woods

Shaded from the sunshine and sheltered by the trees, a pretty path goes through the wood towards the town of Fontaine Henry. After passing a ford across the River Mue, the path goes into a wooded area alongside the river.

Along the way, we can see the cave walls. They were dug out as stone quarries, and today some of them are mushroom beds. Stone was quarried here until the early 19th century. In 1944, the inhabitants took refuge inside the caves to escape from the fierce fighting taking place on the plain. This easily accessible path has quite a mysterious atmosphere. 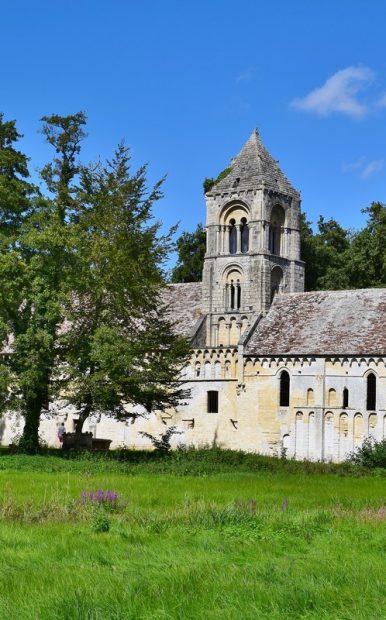 THE OLD CHURCH OF THAON