William the Conqueror made Caen a strategic centre during the Middle Ages. The medieval town of Caen, with its many little streets and monuments, has kept all its historic charm. It is the ideal place to immerse yourself in the era of the troubadours!

On the attack at the Caen Castle ramparts

Caen Castle stands at the very heart of the city and is one of the biggest medieval fortresses in Europe! When you get to the top, you will want to get out your camera because the view over the city of Caen and Saint-Pierre Church is magnificent. Inside the castle walls, don’t miss the keep, the Normandy Museum and the Fine Arts Museum, the Exchequer room, the Governors’ residence, Saint-Georges church and many other fascinating sights.

These two large abbeys were founded by William the Conqueror and are among the most famous monuments in Caen. In fact, they were built in preparation for William’s wedding with Matilda of Flanders, his distant cousin, a marriage that was condemned by the Pope.

With its Saint-Etienne abbey, the Abbaye aux Hommes is a real gem of Romanesque and Gothic architecture. At that time, the distinguished guests of the Abbaye aux Hommes even had their own lodgings: the Ducal Palace, which has now become the Artothèque, Contemporary Art Spaces. Inside the abbey, you can’t miss the imposing tomb of William the Conqueror in the Gothic choir. Remember to look up at the sculptures that adorn the columns!

Monastery of Benedictine nuns, hospital and hospice, the Abbaye aux Dames has played an important role in the city of Caen since its creation. The Abbey of the Trinity houses a magnificent crypt as well as the tomb of Mathilde of Flanders, Queen of England, Duchess of Normandy and wife of William the Conqueror. Do not miss a visit to the Michel d’Ornano Park with an admirable view of the entire city of Caen at sunset!

This is a chance to stroll through the medieval streets with the half-timbered houses and to admire the sculptures and mouldings on the façades. Even though there were once many more of them, Caen still has a few half-timbered houses, especially in Rue Saint Pierre at numbers 52 and 54, and in Rue de Geôle with the famous Maison des Quatrans.

The medieval district of Vaugueux is probably one of the most popular and well-known parts of the city of Caen. This is a historic area with Caen-stone houses dating from the Middle Ages. It is also a very trendy spot. Rue du Vaugueux really brings the Caen evenings to life. The old town square, cobblestone streets, restaurants and bars… During your visit to the district, you can hear how as child, Edith Piaf came here to visit her grandparents, where they owned a café!

Rue Froide and its medieval past

Here reigns an atmosphere of the past! Rue Froide is one of the oldest streets in Caen. There you will find small independent shops, bookstores, artisans, designers and a few gourmet addresses. Do not hesitate to push open the porte-cocheres on the rue Froide, you will find hidden paradises there!

The Leroy Tower, the guardian of the medieval port of Caen

As a lighthouse would guide its fishermen, the Leroy Tower is the only high tower in Caen. At the time, it marked entry into the city by river. It is also the last medieval vestige that remains in the Port district. 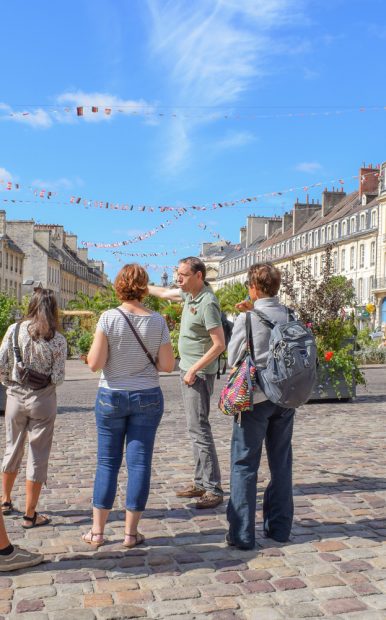 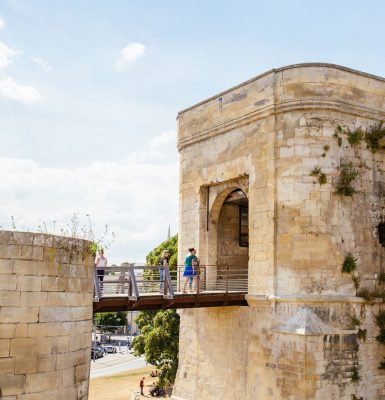 Sites, museum and places to visit